Inquiry
On Method, Disciplinary Longevity, and Rhetorical Curriculum, Part One: Rhetoric as Behavior that Makes Arguments and Shows Character
by Isaac Richards

The Harmful Potential of “Harmless” Memes
by Hanna Newby

Storming the Gate
Beyond Belonging: The Versatility of Queerness in Exit West
by June Shou Li

Pickup Artistry: An Exploration of Hypersexuality and Toxic Masculinity
by Jamie Achtmeyer

Into the Unknown: Masquerading Fear in Over the Garden Wall
Kayla Lawrence

The focus of the 2012 presidential election has revolved around the economy, jobs and the financial future of America. Key points of the presidential campaign are created and presented in election advertisements designed to target not only the focal topic but also a specific audience. But why are presidential debates and campaigns displayed in thirty second and one minute commercials rather than thirty minute or one hour segments? Unless an individual of voting age already has an existing interest in politics, debates and conferences have a limited appeal to audiences overall. Advertisements are an effective method to reach a target audience in a short amount of time. These campaign ads have two purposes: to broadcast a message efficiently and to establish authority and gain trust quickly with the viewer. Using this standard as the basis for my analysis, I examine two 2012 campaign videos, “We Have Heard it All Before,” presented by the Democratic Party with Obama’s support, and “Believe in America,” created by the Republican Party with endorsement by Mitt Romney. In each instance, I’ll be interested in how the videos use logical and emotional rhetoric to sway interest away from the opposing party, and win the vote for the campaign as well as the election.

Revealing the weaknesses in the opposition’s campaign is the primary purpose of both election advertisements. Rhetoric, or persuasive messages and language, is used to target previous political actions and their resulting consequences. This is done primarily by selecting one to three second segments of supporting newspaper articles, video and audio clips. In “We Have Heard it All Before,” the weaknesses in Romney’s term as governor of Massachusetts are targeted. After a brief visual of Obama walking outside the White House and a statement noting that the ad is supported by Obama, the image quickly switches to a bold black and white banner that reads “Massachusetts 2002,” followed by an old video clip of Mitt Romney stating, “I speak the language of business. I know how jobs are created.” 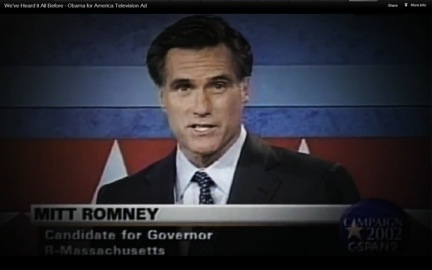 Figure 1: Still of Mitt Romney from “We’ve Heard it All Before”

Following this statement and portion of a previous broadcast, we see a statement pulled from the Boston Globe, originally published in 2007: “Romney’s economic record [is] one of the worst in the country.” Presenting information in this manner serves two purposes. The first is to convince the viewer that Romney is a bad choice by making him appear incompetent and untrustworthy based on his previous political record. The second is to dramatize differences between the candidates and thereby depict Obama as a better alternative.

This is not the only appearance of calculated rhetoric found in election advertisements designed to target a candidate’s image, achievements and ability. Mitt Romney and the Republican Party created a campaign using the same style of persuasion and imagery as the Democrats, but from their perspective. In “Believe in America” Romney uses blurred, faded imagery, designed to make the viewer feel that Obama’s policies, intentions and achievements are sketchy. The video also features bold black on white text, which contrasts the blurriness with a strong, affirmative and actionable alternative. 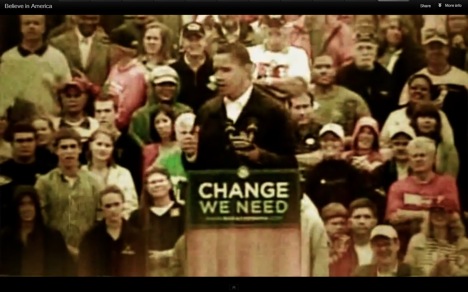 Figure 2: Still of Obama from “Mitt Romney: Believe in America”

Opening with the statement, “He promised the world he would fix the economy,” indirectly references slogans Obama used to inspire voters during the 2008 election, including “Yes we can” and “Change we can believe in.” Designed to target individuals hardest hit by the economic crisis of today by focusing on the broken promises and disappointed idealism from the previous election, the opening is followed by two single but powerful words: “It Failed.” The word “It” reminds viewers of the continued economic sluggishness, and the failure of Obama’s policies. By repeating the promises Obama made during the 2008 election, viewers are reminded that the economy has not improved, and for many the economy has gone from bad to worse. The ad creates a sense of urgency, suggesting that the situation must change and that the individual has the ability to make changes by choosing to support Romney. The ad appeals to the individual’s desire to see the economy improve as a whole, and efficiently targets those who have lost their jobs or are in fear of downsizing or job loss. Also, the ad reinforces the emotional consequences that result from living with financial hardship and the fear of failure on a personal and professional level, which is the implied result of the actions of the President during the past four years in office. As the video transitions from the focus on Obama to Mitt Romney, the picture becomes bright and clear. Visual rhetoric is used in conjunction with verbal messages to convince the viewer that choosing Romney is a “clear” choice and will lead to a “brighter” future.

Election advertisements rely on the message they present, and also depend on an endorsement to gain credibility. Using this approval develops a level of trust with the viewer, which must be quickly gained due to the short duration of commercial clips. Independently made clips have the potential to sway the viewer using visual and textual rhetoric, but they may generate doubts about the validity of the source unless the viewer is familiar with the advocating group. The verbal and visual text, “I’m Mitt Romney [or Barack Obama] and I approve this message,” is a two to three second validation, not only of the video but also of the source. Viewers tend to ignore this information, but these statements are a non-intrusive way for the candidates to take responsibility for their messages. If missing from an election advertisement, would the information be dismissed in the mind of the target audience and/or swing voter? Or is this final bit of information so memorable that it is the only piece retained? While the answer is unclear, we can say that this stamp of approval attempts to form a meaningful pact of trust with the viewer, and could potentially swing voters in one direction or the other.

Interestingly, both advertisements target the majority of voters, the working middle and lower classes. Individuals with this social status are most concerned about the economy and job security. The Romney campaign uses textual and visual rhetoric to reinforce negative views of Obama and his handling of the economy. Phrases are short and concise, which ultimately makes them memorable, and they are reinforced by bold black and white text and blurred imagery. Flashing across the screen are the following claims, “Greatest job crisis since the Great Depression”; “Record home foreclosures”; and “Record national debt.” 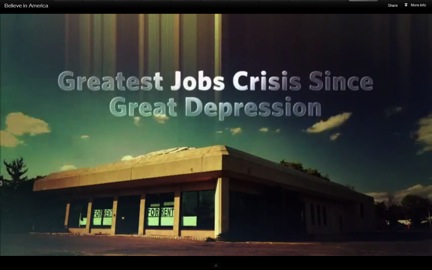 These phrases are designed to play on the fear, concern and worry of those who have experienced financial difficulties. However, these voters are not shown in the video, but rather we see images of empty buildings and homes. These images portray economic failure, and the absence of people implies total loss and abandonment. In other words, the ad shows real situations today as well as predicts a future of continued economic crisis. As such, the ad preys on the viewers’ fears of debt, financial insecurity and job loss for themselves, their family and their friends. The words are carefully chosen to make the greatest impression both on a logical and emotional level, as is the case with references to the “Great Depression,” “foreclosures,” “record,” and “debt.” Even though Romney’s ad does not provide facts supporting these statements, the emotional scene is enough to trigger worries about the financial situation of today and the future.

The Obama advertisements use similar rhetoric, though in a different manner. Instead of using text to make the issues appear “black and white,” this campaign presents text in a newspaper format. This has a striking visual appeal and reminds viewers that the news is an authoritative source for information. Instead of using simple phrases, the Obama advertisements rely on short statements pulled from newspaper stories: “Romney’s economic record, one of the worst in the country” and “Massachusetts lost 40,000 manufacturing jobs — a rate twice the national average.” In addition to auditory and visual messages, we see pictures of empty warehouses and buildings. By using this combination of text and images to discredit Romney’s political record and qualifications, the ad calls his ability to lead into question, particularly by reminding the viewer of the effects of his previous political record in Massachusetts. “RomneyEconomics.com” is displayed on the bottom of the screen without ever being mentioned by the announcer, suggesting that viewers may or may not choose to visit the website and learn more about Romney’s failed policies.

The last few seconds of the video feature Romney’s profile picture alongside the phrase “It didn’t work then. It won’t work now.” The Romney video likewise relies on two scenes in the last few seconds to call the viewer to action. The first shows Romney speaking to an audience at a podium with the phrase “Cut the Spending” in the background of red, white and blue. The second closing image displays him standing at a podium with a farmhouse in the background and is surrounded by average families. The text reads, “Romney…Believe in America,” framed by a patriotic color scheme. Designed to inspire patriotism and connect Romney with optimism and hope, the colors, text and image support the candidate’s authority and aim to inspire a sense of patriotism.

The combination of visual and auditory cues in election advertisements is not only designed to sway the vote or opinion of an individual but also to call them to action. The information can validate an existing or new opinion in only a matter of seconds. Both campaign videos discussed here use textual, auditory and visual rhetoric in an effective manner. However, the visuals and text in “Believe in America” are more effective than in “We’ve Heard it All Before” for several reasons. The most effective use of persuasion is used in the first ten seconds. Displaying a faded visual of Obama giving a speech followed by the bold black and white textual statement, “He Failed,” leaves a strong impression on the viewer about Obama’s ability to make positive changes in job creation and economic growth. The immediate impact of video and words could cause supporters to question their loyalty and potentially swing their vote to support Mitt Romney. Despite the strength of the Republican video compared to the Democrats’, both exploit rhetorical tools, like logos, pathos and visual rhetoric, to create desired effects.

Mary Lake is a first year student in the Pre-Medical Laboratory Technology program at the University of Cincinnati’s Blue Ash campus. She says that her passion for writing articles and poetry began as a child, because writing “is a personal form of expression I truly love.” During her English composition class, Mary was able to push the limits of her ability and write about topics that were challenging for her. She says, “Writing about the use of rhetoric in political ads transformed my opinions about campaign advertisements into an analytical form, and evaluate both parties in a new and exciting manner. Even though politics is not a passion of mine, it allowed me to see subtle persuasion in writing and media in an entirely new and unique light.”